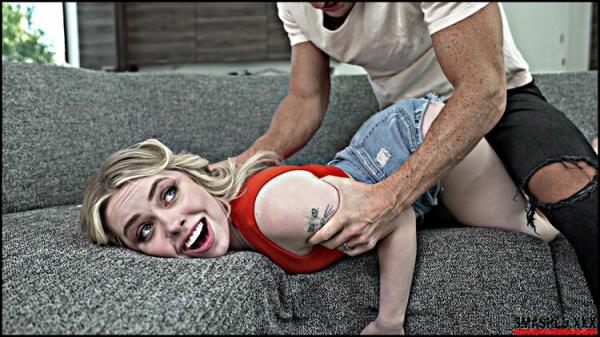 Haley Spades has a new stepdad in Ryan McLane and she really, really wants to tap that. She acts all weak and unable to open a jar of jam so he can do it for her. Later, Haley asks Ryan for a neck rub. He obliges. Eventually Haley can't wait any more. She confesses that she has a rough sex fetish and that she's been saving herself for her stepdaddy. She wants Ryan to smash her.Ryan is happy to give Haley what she wants. There's nothing gentle about the way he shoves her into the couch and kneads her titties. Spanking his stepdaughter as he peels her panties off, Ryan pins her down to the couch. Haley is begging by the time Ryan strips her thong off and gives her a rough and tumble push fingering. He finally gives in and slams his dick into her while spanking that perky ass and delivering a bit of breath play.Flipping Haley onto her back, Ryan licks her clean and then shoves back inside her velvet glove. Fucking his stepdaughter isn't the only rough thing Ryan can do. He takes a seat and tells Haley to open wide for his hardon. She does as she's told, eagerly deep throating Ryan's cock as he face fucks her with his hands in her hair. Obediently, Haley climbs onto Ryan's lap so he can piston up into her greedy snatch. When she finds herself on her shoulders with Ryan giving it to her from above, Haley screams in delight. As Ryan gets close to finishing he lifts his stepdaughter back onto her hands and knees on the couch so she can take another deep throat face fucking until he gives her a facial to finish himself off. 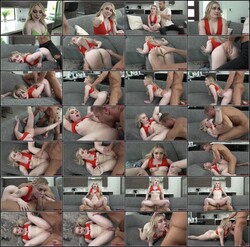